LRGeocode, a helper for adding GPS data to photos

In my spare time I’m something of an amateur photographer and over the years I’ve amassed quite a collection of photos, nearly 6,000 at last count. My full-time job is as an engineer which leads to certain habits, like an insane need to organise and categorise everything I own to within an inch of its life. In photography this expresses itself as tagging every photo religiously, recording who is in it and where it was taken.

I’m not quite so over the top to need to record precise co-ordinates for every photo, nor do I have a GPS that would do that for me anyway, so I’ve just been putting in the town, country and general location info as a rough guide. Turn out that is all that’s needed to be useful for finding stuff once you can’t remember exactly when you took it and there are standard metadata fields for it so it works in many photo apps.

So I wrote LRGeocode, a plugin for Lightroom 4. It takes the location, city, state and country fields from a photo and uses Google’s geocoding API to attempt to convert them into GPS coordinates. It’s not perfect, Google’s API doesn’t return quite the same results as you find in Google Maps, and of course some of my fields were sloppy leading to sloppy results. Still it helped me turn a task which might have taken quite a while into a weekend project. It got the bulk of the photos mostly correct and after some manual tweaking I now have pretty good GPS data for nearly my entire photo collection. Maybe it will help you too.

I got tired of having webapps like gmail, google groups and google reader open permanently in Firefox. My web browser simply isn’t the home for permanently open things. Instead I’ve taken someone elses extension and made it generally more awesome to allow me to open such things in Thunderbird. It’s called WebApp Tabs and is now available.

Where is PreFox for my Touchpad?

It’s been over a year since I last posted about PreFox and while there was some initial interest it seems that mostly people pretty much forgot about it. Now of course webOS 3 and the Touchpad is the new hotness and so interest in the project has grown to the point that I’m getting a few emails a week asking for status updates.

I think I probably wasn’t clear enough in the last post just what the status of the project is. Right now it is basically dead. I have no time to work on it, nor do I really have the skills necessary to move it forwards. I don’t even use my old Palm Pre anymore, nor do I own one of the new phones or tablets that actually runs a modern webOS so even if I had the inclination to work on it I wouldn’t have the hardware to be able to do so. And of course as things stand right now it looks likely that webOS is dying and it doesn’t seem to me like a useful experiment anymore.

Anyone is welcome to take the initial code I wrote and try to get the project started again, that is the beauty of open source. I would love to hear from you if you do and will happily direct anyone asking to you.

Posted in Labs | Tagged browser, palm, prefox, touchpad, webos | Comments Off on Where is PreFox for my Touchpad? 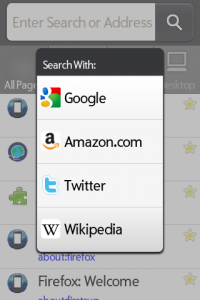 PreFox is a project I’ve been working on in my spare time on and off for about 5 months now to port the mobile version of Mozilla Firefox to the Palm Pre which has been my phone of choice for the past year.

As someone who uses Firefox all the time I felt that the Pre’s built in browser was lacking in a number of ways. It cannot remember passwords, seems to lose cookies all the time and doesn’t support some of the functionality that sites like Flickr require to work correctly. Fennec (which is the code name for the development versions of Mozilla Firefox for mobile) seemed like it would solve all those issues and as it had already been ported to Android it sounded like an interesting challenge to get it working on Palm devices.

It’s taken longer than I had hoped (mostly because of having to wait for Palm to release updated OS versions and because my spare time is sparse right now) to get this available for people to play with and really it is still not release-worthy, more of an interesting plaything. I’ve taken it as far as I can which is to say it runs (though not as fast as it could), seems to be stable and the majority of the main features are working. There is still lots of work to do but it is not within my area of expertise and I am hoping to find other people to take on the project and solve the remaining problems.

You can read more at the PreFox project page as well as learn how to get the latest build to try it out for yourself.

What is Fractal Brew? I’m not sure yet.

For now it is a placeholder for software projects I work on in my spare time. Some never reach the light of day, but some get to see a release and those will appear here, normally with links to source code and downloads since nearly everything I do is open source.

Posted in Uncategorized | Comments Off on Welcome to Fractal Brew